Medical Center » About Us » Patient Safety and Quality » Sepsis

At Hutchinson Regional Healthcare System we care deeply about the well being of our patients and their families.

Sepsis is a complication that occurs when the body has an extreme response to an infection. It causes damage to organs and can be life-threatening if not treated. Identifying sepsis early and starting appropriate care quickly increases the chances of survival.

How does Hutch Regional compare to state and national levels for sepsis care?​ 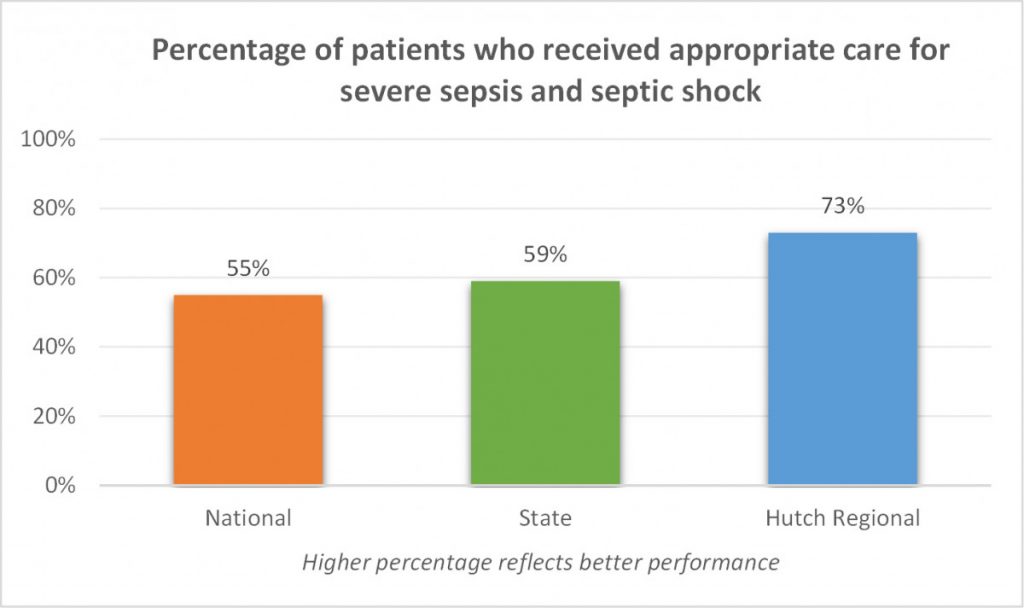 Any infection, from the tiniest source (a bug bite, a hangnail, etc.) to the more severe (pneumonia, meningitis, and so on), can trigger sepsis, which can lead to severe sepsis and septic shock. Those at the highest risk of developing sepsis include infants and seniors, as well as people with chronic or serious illnesses, such as diabetes and cancer, and those who have an impaired immune system.

Sepsis should be treated as quickly as possible as soon as it has been identified. This means rapid administration of antibiotics and fluids. A 2006 study showed that the risk of death from sepsis increases by and average of 7.6% with every hour that passes before treatment begins.

Antibiotics are prescribed by the physician based on the type of infection that is causing the illness. The first antibiotics are usually broad-spectrum, which means the antibiotic is effective against several of the more common bacteria. The antibiotics are given intravenously in order to ensure they get into the blood system quickly and efficiently.

IV fluids are also needed as antibiotics alone won’t treat sepsis. The body needs extra fluids to help keep the blood pressure from dropping dangerously low, throwing the patient into shock. Giving the fluids by IV allows health care staff to track how much fluid is being administered and to control the type of fluid the patient is getting.