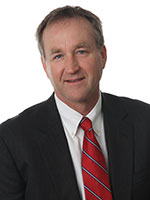 CEO and Vice Chairman at First National Bank of Hutchinson

Keith has served on the HRHS board since 2010. He grew up in Oakley, KS and graduated from Kansas State University with degrees in accounting and corporate finance and later earned a graduate degree in banking from SWGSB, Southern Methodist University. He moved to Hutchinson in 1980 and began a career in banking with First National Bank and has spent his entire career with the bank; with the exception of a two-year period in the 1980’s with a wholesaling and brokerage company. He has held various positions with the bank over the years including his current position as Chairman after 10 years as CEO. Through his role on the HRHS board, Keith recognizes the hospital’s important position in the local and regional economy and he brings great experience and expertise in finance, economics and management to the group. He and his wife Renae have two sons, both mechanical engineers. In his spare time, Keith enjoys home and farm projects, playing golf, reading and hunting.